skip to main | skip to sidebar

Aside from being and excellent opportunity for sock knitting, the eastwardly roadtrip had several purposes: to show Dready the French the “old” part of America (We’ve got history! See right there, there it is…oh you missed it.) and to reconnect with “old” friends…Dr. Vic who I’ve known since I was 16, and Molly a wonderful friend from Jr. High School who I hadn’t seen in over ten years! Ten freakin’ years! Molly came into Philadelphia from New York on the Chinatown bus on Sunday night, and we had a hard time finding each other…apparently there are two bus lines out of Chinatown that will take you to Philadelphia, and they stop within a couple of blocks of each other…we picked the wrong one to wait in front of. I don’t say this very often, and I will deny, deny, deny if ever confronted by it, but “thank God for cell phones.” 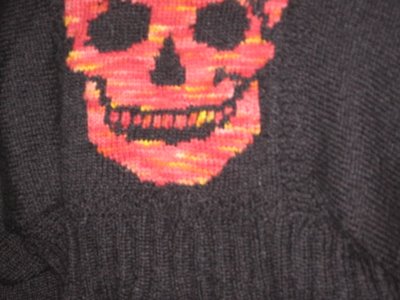 So I guess it’s good to know that I haven’t changed that much in 10 years…I am still easily identified by the skull on the back of my sweater. Or shrug rather. What? Skull shrug say you? Would you be talking about this skull shrug? 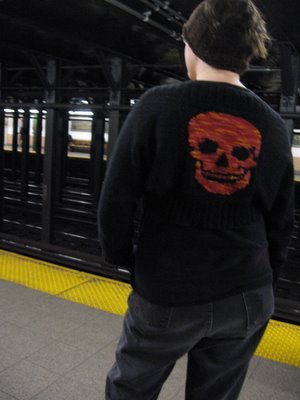 Hmm…it’s kinda blurry, and you’re wearing it over a black shirt so it’s sort of hard to tell where the shoulders come in. You’re not a very good photographer are you Ragnar? No. No, I am not. But in my defense it is an on location photoshoot in the Subways of New York. That’s pretty damn exotic for a Midwestern girl, eh? Eh? The particulars. The skull, my first intarsia project, why thank you...I think it turned out very nicely too, is from the DomiKNITrix, who hangs her hat here. She's pulled the skull chart off her site because of bandwidth theft, but you can probably make your own with Knit Pro, which is found here. I promise, promise, promise to post better pictures of it someday.

Oh, and by the way. The hat/earband/bad-hair-day-hider that I’m wearing? That’s Manimal’s first knitting project ever. Pretty good huh? In the round, double pointed needles, ribbing, no pattern and did I say first project ever? He’s a talented boy that Manimal o’ Mine.

I’m going to randomly include roadtrip anecdotes until I run out of anecdotes/pictures. This is an attempt to limit the “and then we went there” and “then we did this” aspects of roadtrip stories so that my dear bleaders don’t get bored…also to ration the pictures since I have no camera of my own. 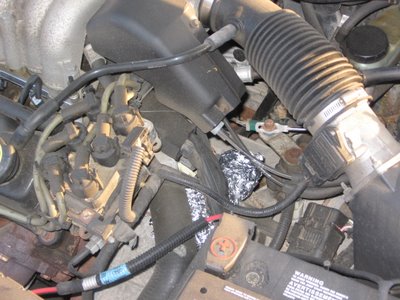 This is a picture of the engine compartment of Dready’s car. Notice the brighter silver object? That’s my left over breakfast, wrapped up into a burrito by the owner/cook of the best breakfast place in the world. We had pulled off to get gas and I told Dready to pop the hood so I could heat up my lunch. I said this in a matter of fact sort of way, as if everyone heats up their lunch in the engine compartment of their cars, and I think she felt too self conscious to say “What are you crazy?” It was sort of hard to find a place that would accommodate a burrito. I think they should design special food heating platforms on the exhaust manifold, but alas my letter writing campaign doesn’t seem to have had any effect just yet.

Anyway, we’re pulled off at this gas station, and I’m rummaging around in the engine compartment, and the only other car in the place has two girls in it; girls of the white t-shirt, tight stonewashed jeans and teased hair variety. Very solicitously they ask if there’s something wrong with the car. “No,” says Dready in her French accent, “she’s just heating up her breakfast.” Without any noticeable pause one of the tight-jeans wearers says “That’s the kind of girl to be!” reinforcing the notion that normal people do this sort of thing all the time. I think at this point Dready was thinking “everyone in this country is nuts.” She really started to question my sanity when I closed the hood and said “Okay, ready to go.” “Is your burrito hot yet?” “Oh, no, I’ll pull it out when we stop.” “What?! We can’t drive with that thing in the engine! It’ll fall out, or get caught in something!” “It’ll be fine.” “It’ll fall out.”

So for the next 40 miles Dready got a big kick out of saying “What’s that silver thing on the road? I think your burrito fell out” every time we hit a bump. When we stopped she said “If that thing is still in there, I’m taking a picture of it.” Which is why we have a picture of a burrito in the engine compartment of Dready’s car. The burrito was very tasty by the way, more warm than piping hot, but definitely edible.

You know, I consider myself pretty adaptable and clever, but I have never (and probably would never) heat up my food with my car's engine.

Oh, and I covet your skull shrug.

fab shrug Ms. Ragnar. I'm glad I had the good sense to copy that chart while she still had it up. And I need to make her devil hat soon, i bought that pattern since April 2005!!!

hmm. i think i keep posting on earlier days.
drats. young lad is driving me batty...

Yay, the skull shrug! It's sufficiently awesome that I'm not too grumpy about the wait ;)

But what I really want to know is what is that holding your hair back?

back in the old days, people heated baby bottles like that on long trips. (glass.baby.bottles)

Your skull shrug is awesome. I've been searching everywhere for non-frumpy knits, and sometimes they're very hard to find.

If I may posit an unusual compliment, I think your name Ragnar is beautiful. Is it Norwegian? My mother's family goes way back to Norway, the land of the Vikings and cozy wool sweaters. How us Scandinavians got to southern Michigan (in my case Kalamazoo, TC originally) is beyond me....
Good luck with your knitting! --Alice

On the domestication of pirates, including but not limited to knitting, quilting, homebrewing, gardening, cooking, pillaging and plundering.

Ragnar
No one's more surprised than I that my pirate ship got beached in Lansing, but it's home now. It is my life's ambition to have more free time so that I can fill it up with more projects, more knowledge, more adventure and more art.

Not Quite Free Patterns

My other life. I'm engaged in the massive gut remodeling project of my house.

These People Knit...And Write About It!